How long would it take...

to see this blog posted late? Only 1 month.  But at least there is a post this week.

I had a fun weekend. Early last week I messaged Lara to see if she'd be up for some geocaching.  She agreed, and we met in North York for a fun day of exploring the northern parts of Toronto.

The greatest thing about caching is discovering interesting sites that you'd probably never notice otherwise. We found a tank in a cemetery... 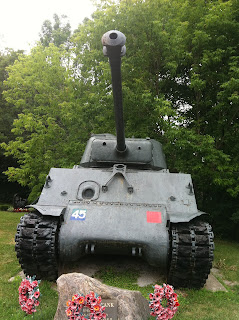 Saw a beautiful rainbow in a fountain... 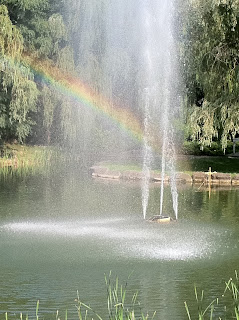 and had a great lunch... 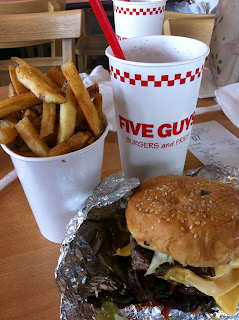 We also explored a beautiful wooded ravine, and scratched our heads in a cul-de-sac where the coordinates pointed us to the very center of the street.  Nothing there but a couple of manhole covers.

Sunday was a lazy day, but we did celebrate Breanna's birthday.  Can't believe my niece is already 10 years old! 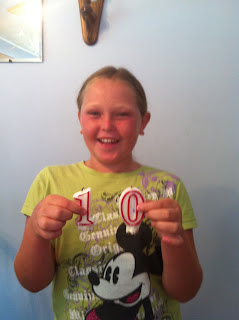 The good ol' RADP gang got together in chat Sunday night to hash out the planning for this December's meet.  I think we've got a good start on it.  Now I just can't wait to get back down there!

No major doings this weekend.

But I did go geocaching both Saturday and Sunday.  I didn't travel too far, just over towards Brechin on Saturday, and Barrie on Sunday.  It was great just getting out on a couple of sunny summer days.

I really hope the city of Orillia purchases the land that the former Huronia Regional Center sits on.  There is a beautiful beach there, and great looking lawns.  The city could use some more waterfront park land like this. 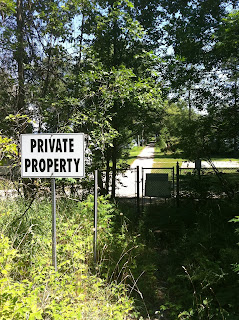 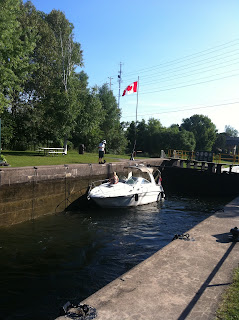 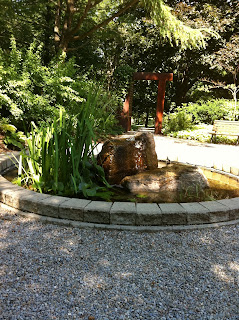 I also took a drive over to Lock 41 on the Trent Severn, where there used to be a cache.  Apparently was archived, but I still had a nice time watching boats go through the lock.  I didn't realized that some of the locks on the canal were still manually controlled.  You'd lose a few pounds if you spent your summer opening and closing locks all day.

Sunday I cached in the Barrie area and I used my iPhone to solve a wherigo for the first time. Glad to see the app works well, and I had fun doing it.

One of my favourite things about caching is discovering treasures in my own backyard.  I think the spots I went to this weekend confirmed that.
Posted by Kevin at 10:08 PM No comments:

Email ThisBlogThis!Share to TwitterShare to FacebookShare to Pinterest
Labels: Geocaching

And the summer rolls on...

So six weeks ago I started a running program called "Couch to 5K".  It's slowly increasing my endurance so that I can run for 25 minutes straight without collapsing in a heap.  It wasn't so bad until it started getting super hot the last week or so.  But I've mostly been running on trails that run out of a park near by, and in the trees it feels much cooler than out in the sun.

The drawback of running in the woods is that the trails are not even.  You have to watch out for roots and rocks, and the trail runs the gamut from boardwalk to mud.  But for the coolness of the forest, i risk it.

On Friday I was about 5 minutes into a 25 minute run.  I don't know if I tripped on a root, or stepped into a hole or what, but I went down.  Hard.  But I am nothing if not committed to my new fitness regime.  I picked myself up, saw how scraped up I was, dusted myself off and kept running.  And I ran just over 3K in those 25 minutes. 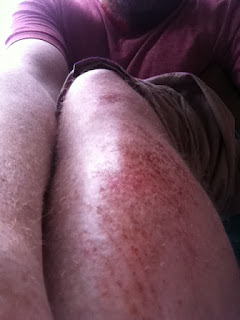 The scraped shin looked bad, but it wasn't until much later that I noticed how swollen my other ankle was.  I don't think I sprained or broke anything but it was tender for a little while.  Things seem good now.

Tomorrow is when Week 7 Day 1 happens.  I'll probably take it kind of easy, but I'm not giving up the program yet.  I've made it this far, I'm not giving up now.  Besides, this is my first sports related injury in YEARS.  I'm kind of proud of it.

To change topics totally, I saw Captain America today.  What a FANTASTIC movie.  I'm pretty sure it's my favourite super-hero movie of the summer. Chris Evans was great in the role, and the supporting cast was wonderful. There's even an Alan Menkin musical number in the middle of it! Marvel really knows how to make these movies something special.  And the 12 year old kid who used to pick up Avengers comics at Robbie's Variety monthly is now the 40 year old guy who can't wait to see the Avengers movie next summer.
Posted by Kevin at 8:55 PM No comments:

It's good to have friends with different interests. 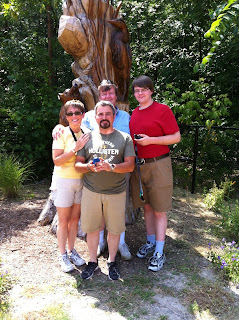 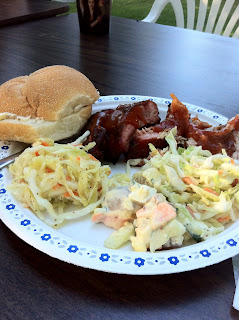 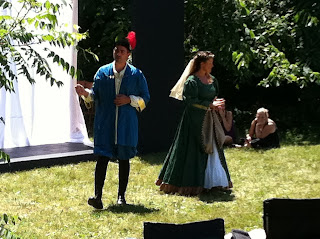 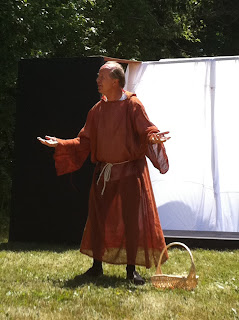 As someone who has a lot of different interests, it's great to have several circles of friends with whom I can share my passions. This weekend has been a great example of that. The last couple of summer weekends I haven't had much going on, but this weekend there has been one of those rare convergences where so many things were going on, I couldn't get to all of them.
It started Saturday morning. I took a drive to the south shore of Lake Simcoe to see the Queenston Players do some Shakespeare on the grounds of the sadly departed Red Barn Theatre. Aside from the overpowering sunshine, you couldn't have asked for a better day for a little Romeo and Juliet, Shrew, Hamlet, MacBeth and Dream. My friends Patsi and John along with the rest of the troupe, very admirably handled the text, and the cuts that were made made the stories easy to follow.
From there I headed north to the fields of Oro-Medonte, where Ed had invited the Blue Beetle Comics gang to his place for a barbecue. And what a feast it was! Ed takes his barbecue very seriously so the ribs and pulled pork had been smoked for hours. The sauce he made beat anything that comes in a bottle. His wife Ang made some of the most delicious cole slaws I've ever had. It was great catching up with everyone in that geek circle since my new job prevents me from meeting up with them on the traditional Wednesday nights after new comic day. Great food, great friends and great general geekiness!
The weekend closed with a drive down to Mississauga. My friend Tric had asked for a geocaching lesson so I headed south to hit the city. I met up with Phil and Amanda, who were going to join us, for a brief look around the Disney Store at Square One first. (Did you know they sell Vinylmation at the Disney Store now?) About 2:00 we got to Tric's and went out into the wilds of Mississauga. We ended up finding 5 caches on the day and had a great time trying to stay cool.
So my lesson in all this is to indulge your passions. Meet people who share those passions. And live life to the fullest!
Posted by Kevin at 8:53 PM No comments:

It's good to have friends with different interests.

Not a lot going on these days. The days are long and hot, and the evenings are spent at work trying to convince people to buy computers. I look forward to my weekends, but so far this summer not a lot has been going on.

I did go to Barrie and see a fantastic show on Saturday night. William Shakespeare's The Tempest, presented by Theatre By The Bay was wonderful Now I wasn't very familiar with this play, only really knowing some character names and that there was magic in it. The story was very easy to follow, and the performances were stellar across the board. The way the actor who portrayed Caliban carried himself on stage made me writhe in pain, knowing I could never hold my back in that position so long. The set was simple but evocative, and the music written for this production was wonderful. I truly hope this show gets the audience it deserves.

It was great spending some time after the show catching up with friends, and talking theatre. I love being a part of such a vibrant community.

I kept up with my running program this week, finishing Week 4. I'm going to start Week 5 a day early for 2 reasons. My niece started running at school this year and wants to join me. She's here Mondays and Fridays. The second reason is that I have a busy weekend planned for the upcoming weekend, and I don't think I can squeeze in a run next Saturday. So we're switching to a Monday-Wednesday-Friday schedule. I hope the increase in running time for Week 5 doesn't kill me.

Again another week where I didn't watch much tv. I set my PVR to record Torchwood last night, but it didn't take for some reason. I tried to watch it on Space's website and there's no sound! I'm sure it will be fixed soon, and I'll catch it then. I did discover that there was a software update on the PVR and you can set it to record only first run shows now. That'll be great when the fall season rolls around. The only other show I watched was the finale of Top Chef Canada. I didn't care for the guy who won, although he seems like a great cook. When contestants on shows like this bend the rules and whine when things don't go their way, I want them to lose. It didn't happen this time. Guess that proves reality tv isn't rigged. 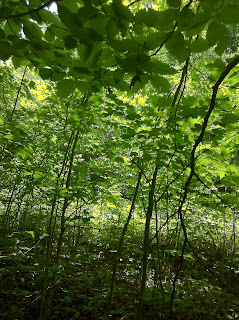 So the title of the blog is Daily Doings, but if I try to keep to a weekly schedule, things are more likely to stay up to date. Not a ton of updates this week.

My birthday was Wednesday. Thanks Ann, for taking me out to lunch. On the whole it was a pretty low key affair. I did work that day so no big parties. There was one night when I could not get to sleep no matter how hard I tried so I was up all night watching episodes of Top Chef Canada I wanted to catch up on.

I hardly watch tv any more. I listen to a lot of podcasts about a lot of different topics. I find surfing the net, chatting with friends on facebook and reading blogs about topics I'm interested in much more fulfilling. One day I'll clean out my PVR and get caught up with shows, but right now, I just don't care.

I finished Week 3 of the Couch to 5K running program this week. That means I'm up to 9 minutes of running in a 30 minute exercise routine. I enjoy running through Scout Valley, but I really have to watch my footing there because the terrain is so rough. I'm a week past where I stopped when I tried this program last summer. This year I've got a little more motivation to keep it up. One of the local theater groups is doing the Full Monty next spring...

I finally got out and did some geocaching today. Started with the unfound cache closest to home and continued my way down the Oro-Medonte Rail Trail. Did about 5K of walking which helps with the exercise regime. It was hot, so I treated myself to a strawberry shake at the end of it. Gotta love the Burger Pit!

Not much coming up this week. Back to the phones tomorrow. We've been given the okay to work extra hours this month, not sure how much I'm going to do. One thing I can say is that I am saving a lot of money by working evenings. Not going out a couple of nights a week is keeping the cash in my pockets.